War is not the answer

A change to the usual set up this week, as we start with:

Could have been PC gaming but despite having purchased the Brothers in Arms 3-game collection at a very low price, I completely failed to install it on my PC. I was distracted by the equally cheap and even more hectic Battlefield 4 on PS4, in which I have achieved very little so far; beyond marvelling at the pretty graphics and the sheer amount of ammunition expended.

Achtung Cthulhu continued to happen. The characters investigated some suspicious goings on in Rome, and managed to avoid launching an infiltration mission that would most likely have ended in a fascist bullet-storm and many, many allied fatalities.

Next week, more of the Mortal game may occur, and before that I’ll have to do some tweaking of the ‘Russia Revolution 1917’ plottings that are gradually emerging from the chaos. It’s all a little sketchy at the moment, on the cusp of great and terrible events etc. Except with more vampires.

Also there are some rules issues that have given me ideas.

Work on my revision of RIME continues.

The release of the comic containing my story approaches ever closer. I’ve had some thoughts for other stuff to write.

There was another rejection of my prose fiction, but then again I was also asked to write something else in the comic strip line and I’ve been given that some thought. I have an idea for an espionage comic strip in the style of 1960s and 70s spy shows. But also in the style of The Prisoner. And a few other things besides. I’ve worked out a basic plot so far, just need to build some detail on the bones.

I took the 24 shots available with old film, and sent them off for processing.

The negatives returned with impressive speed, and then the whole experiment slowed down due to the fact I have misplaced the 110 film tray of my slide and negative scanner.

I’ll need to find that, buy a new one, or create a work-around, because otherwise scanning the negatives will not be a positive experience.

Here’s one shot that emerged from a test scan though, and I’m impressed by how well the film has managed to capture colour, despite the many decades involved. 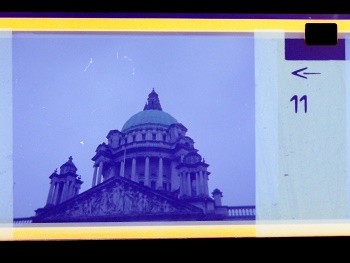