Back with more waffle about what I’ve been up to lately, in a vague attempt to build up a blogging habit.

The proposed launch into OSR did not happen as planned, due to unforeseen circumstances for one of the players, and there was a short discussion about what the rest of the group should do instead. In the end, I decided to run a session/play-test of my fledging ‘game about vampires, and stuff’.

For reasons that may never become clear, the game is called MORTAL. This attempt at a game/system mostly came about because I ran the Amazing Tales rpg for the kids and it has a very simple mechanic where your character ability is based off a particular die. You pick a few things your character can do–say you’re a wizard and you choose fireball, flight, hit people with stick, climb trees–and then assign a die to each one 12, 10, 8 or 6. Any time your character tries something, you roll the appropriate die, score 3 and up and you succeed, 2 or 1 are failures. If they succeed, you ask the player what happened, if they fail, you describe what went wrong, ask them what they want to do next. So straightforward a four-year-old can play it.

So, for the Mortal game I wanted more dice, and also fixed abilities, but I wanted to keep that ‘3 and up is a success’ mechanism; mostly because I envisaged supernatural creatures as being powerful and very likely to succeed. The game would be about the consequences of the character’s actions, not about their struggle to achieve basic things. Obviously it gets more complicated than that as it goes on, but that was the general idea.

There was much early discussion about the names of the abilities a vampire character could utilise, how they would operate, and about how many there should be; all of which finally concluded with an agreement on six abilities, named after sins.

The original notion of a single die for each ability then expanded into allowing vampires of a certain age to have extra chances at rolling successes. For example a one thousand year old vampire would have three of each die rather than one. So a vampire with d12 in the combat ability, Wrath, would roll a d12 and hope for 3 or above. If they rolled a 2, they would fail, but if the player chose they could always roll a second die and hope for a better result.

More rules were added about rolling a 1 on any die meaning you had not only failed but there was no option for a further roll; and also the notion of the ability in which you place your d20 being your Prime ability. Rolling a 1 in your Prime ability generates 1 point of Pride, which has consequences going forward…

Anyway, that’s all getting very system orientated which, amazingly, isn’t really my thing. I mean, I wanted a system so simple players could create their characters and everything else would be obvious from that. Anything not covered would be determined by the narrative, serve the needs of story, keep things moving and fun, or whatever way you want to frame it.

Still very much at the play-test stage, and there are a few quirks that need to be ironed out/beaten flat.

The players decided that Russia in 1917 was the place to be, rather than going for something like the “Withnail & I, with vampires” concept I had playing in my head. But there you go. The adventure continues.

The revision of RIME continues, very slowly. It’s an interesting process at the moment, even reading over what I have already and how it all fits together, figuring out if all the plot threads really build to a proper conclusion, discovering other bits and pieces I want to weave into the background.

In other news, one of my comic strips is currently with an artist and should be published soon in a local comic magazine. More on that when it happens.

I have more comic strips to write, and some short stories too. Also a vague notion about a short movie script, because why not try doing five or six different things at once 0.o

As a brief experimental tangent, I purchased a cheap film camera of Ebay, and also picked up some film for it for a reasonable price.

The camera is a Kodak Pocket A-1, and is exactly the same model of camera I had when I was around 9 or 10 years old. I probably still have my actual childhood camera somewhere to be honest, but I’ve no idea where that might be. 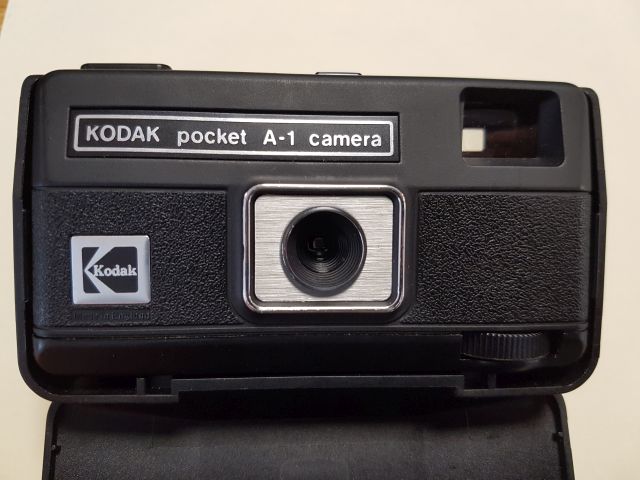 The film is 110 format, 24 exposures, and I’ve taken my initial practice shots and sent it off to a place in England for processing. It’ll be interesting to see how that turns out. The film expired about 30 years ago so there’s really no telling how much fog and discolouration will have resulted. It’s not like the present day where you can take a photograph, notice it’s terrible and then delete and move on. I’ll have to wait for my disasters.