As the actual question number five–about recurring NPCs–covers a lot of the same territory for me as the previous question, I’ve decided to go with one of the alternative options.

I’m taking this to mean something other than getting a gold watch and going to live in France; or finally winning a flying long-ship crewed by dancers…I’m thinking of it more in the sense of “routine retirement of a replicant”.

Perhaps I’m wrong in that presumption?

Anyway, there was this character–let’s call him Eddie–who was very like Fitz from the TV show ‘Cracker’. The original UK version played by Robbie Coltrane this would be. Expect Eddie also had a bit of esoteric business going on where he could tap into the minds of other folk and really get an understanding of what made them tick, sort of thing. He could see the clockworks whirring. Give them a nudge, here and there. It’s all good. Handy for solving terrible crimes and what not.

Trouble was, games being what they are, it only took a few bad dice rolls for Eddie’s careful finessing of people’s thoughts to turn into a wild bludgeoning that knocked people right out of their tree.

As I remember it, the dice just seemed to be breaking bad, every single time Eddie tried to check anyone’s mind, and things were getting seriously out of hand and this was when the game was reaching an after a fashion raggedy denouement …

END_OF_DOCUMENT_TOKEN_TO_BE_REPLACED

In some ways this is an easy-ish one. I think I discussed this last year as well.

The answer for me as a player is the fighter/vampire Drelnza from Lost Caverns of Tsojcanth. At first, I was struck by the fantastic scenario artwork–Drelnza’s (supposed) final resting place–then the PC cleric was struck by Drelnza’s sword, and then my character, the fighter known as Nilok, was hit by a charm spell and totally enthralled.

END_OF_DOCUMENT_TOKEN_TO_BE_REPLACED

Attempting to move my wordpress blog to my pre-existing web-hosting with a different provider.

So far it’s going well. Although I’m not convinced I have everything pointing in the right direction as yet. No doubt it’ll all shake out over the next day or so.

Eventually it’ll have the old web address but at the moment I have this alternative ‘brokentoys’ one. Maybe. I dunno. Some things seem to already link just fine using the old address, other things/devices…not so much.

War is not the answer

A change to the usual set up this week, as we start with:

Could have been PC gaming but despite having purchased the Brothers in Arms 3-game collection at a very low price, I completely failed to install it on my PC. I was distracted by the equally cheap and even more hectic Battlefield 4 on PS4, in which I have achieved very little so far; beyond marvelling at the pretty graphics and the sheer amount of ammunition expended.

Achtung Cthulhu continued to happen. The characters investigated some suspicious goings on in Rome, and managed to avoid launching an infiltration mission that would most likely have ended in a fascist bullet-storm and many, many allied fatalities.

END_OF_DOCUMENT_TOKEN_TO_BE_REPLACED

Back with more waffle about what I’ve been up to lately, in a vague attempt to build up a blogging habit.

The proposed launch into OSR did not happen as planned, due to unforeseen circumstances for one of the players, and there was a short discussion about what the rest of the group should do instead. In the end, I decided to run a session/play-test of my fledging ‘game about vampires, and stuff’.

END_OF_DOCUMENT_TOKEN_TO_BE_REPLACED

randoms xv: it starts with the hands

I had a dream about people turning into cows. Not actual cows, more a kind of Gerald-Scarfe-Pink-Floyd-video grotesquery of lumpen bovine humanity. It starts with the hands and feet, maybe, becoming useless club-like stubs at the ends of spindly limbs. The rest of the body is bulked out, the epidermis peeling away to leave dun coloured patches of blubbery flesh. The face is elongated, snout like, the ears are curved protrusions of stretched skin. In a certain light I guess they do look more like pigs? But in the dream they called them cows at first and that name sort of stuck.

It’s not a localised event. It’s a worldwide phenomenon; a social crisis and a health catastrophe. How does the world respond? How do family and friends cope if it happens to a loved one? What do you do if it begins to happen to you?

I woke up before that part of the dream unfurled itself. In many ways that’s a blessing.

Question 10: Where do you go for RPG reviews?

These days if I’m not picking stuff that’s been around for two or three decades, I’m buying things off Kickstarter before the reviews are even in.

Question 9: What’s a good RPG to play for about 10 sessions?

(I’ve let things slide a bit over the last few days, time to catch up a little)

As I don’t tend to use scenarios at all–more inclined towards making-it-up-as-we-go or setting out a vague series of events with which the characters can interact–games typically go on (and on) until we reach what seems a suitable point to pause.

In the supers game the player characters killed a persistent enemy and stopped a nuclear detonation. Perfectly respectable to take a break after that.

In the Stars Without Number campaign of rambling space adventure, they’ve stopped off at a remote planet to help an escaped recording artist lay down some tracks for her new album.

No idea how many sessions it took to get to those particular points.

I’ve never really thought about ‘timing’ for games unless they were really short “this’ll take a couple of sessions, tops” sorts of thing.

Question 6: You can game every day for a week. Describe what you’d do.

A few times in the past various groups I’ve been involved with have done vague ‘seasons’ of a specific genre of game. Everyone taking turns to GM a crime game, or a military game, or whatever. So a week of gaming would probably involve that.

Also, it would probably be an ideal opportunity for running ‘team conflict’ games where you have two (or more) groups of players in different rooms and the GM goes between them as each group heads for the same ultimate objective.

Mostly it would just be whatever gaming we’re doing now, except more of it.

Question 5: Which RPG cover best captures the spirit of the game.

Setting aside all the tv/movie tie-in games where they can’t really go wrong with the covers (Doctor Who, James Bond, Star Trek), most covers haven’t made much of an impression over the years.

I guess the following would be high on any list: 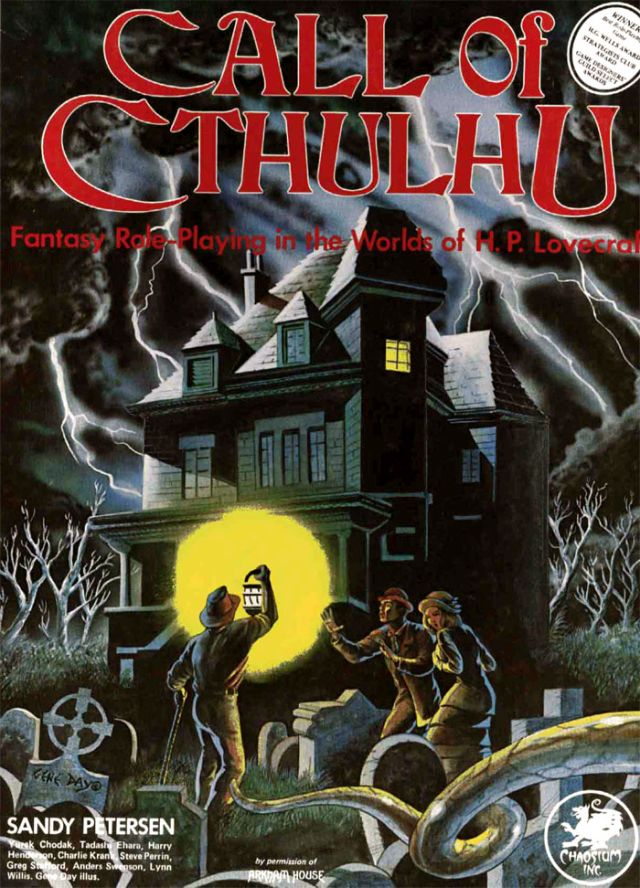