In some ways this is an easy-ish one. I think I discussed this last year as well.

The answer for me as a player is the fighter/vampire Drelnza from Lost Caverns of Tsojcanth. At first, I was struck by the fantastic scenario artwork–Drelnza’s (supposed) final resting place–then the PC cleric was struck by Drelnza’s sword, and then my character, the fighter known as Nilok, was hit by a charm spell and totally enthralled.

In our game the character was called Drenzla, and I spent the next ten years of AD&D trying to track her down after she got kidnapped by Gnomes. It should be noted that after the initial event/fight/spellcasting, Drenzla didn’t make much of an appearance in the ongoing campaign, but her fate and fortune were always in the background. 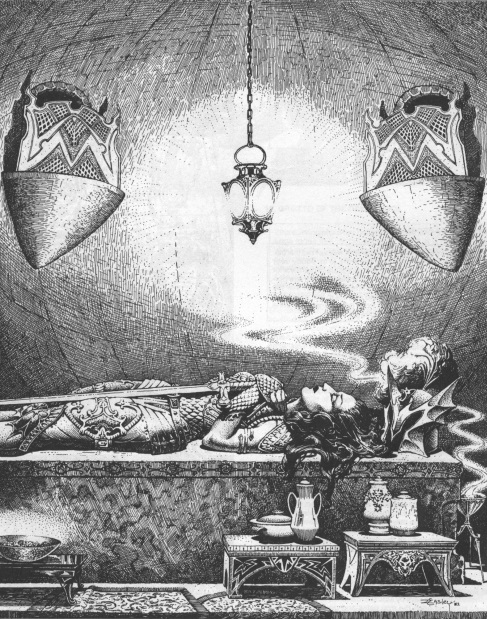 Drelnza, ‘safe in her alabaster chambers’, by Jeff Easley

In more recent times, there’s been a man known as Cutter from a long-running game called Glasgow, a PC-turned-NPC called Hush, and Kit Marlowe has made several memorable appearances in our Lamentations of the Flame Princess campaign.

From a GMing perspective, I’ve had variations on an NPC called Cinders appear in a great many superhero games; the latest being a character code-named ‘Sind’ in the BRIXMIS/London Zoo game I’m just about to relaunch using the Marvel Superheroes system from the 80s. Everything wants to burn, Cinders just helps it along.

As for most memorable PC or player? I wouldn’t know where to start.