Question 14: Which RPG do you prefer for open-ended campaign play?

As my games tend towards endless sprawl, I’m happy for any system to be used for on-going campaigns. Case in point, the supers-in-Berlin-1950s game I’ve been running for a while, I already have it in my mind that I can step forward to the 60s at some point and keep the same world rolling along. Then the 1970s and ever onward.

Given the number of times I’ve done this sort of thing I suppose the correct answer is ‘superhero games’. They provide me with my preferred vehicle for building worlds, histories, legacies.

Question 15: Which RPG do you enjoy adapting the most?

I don’t really enjoy adapting them so much as I sometimes feel compelled to adjust or throw away any bits and pieces that annoy me.

There was a fatigue system in Runequest 3rd Edition, for example; couldn’t be bothered with that at all.

Question 16: Which RPG do you enjoy using as is?

The least complicated ones. I’m not really a systems person. I guess it’s like special effects in movies; I want something that I don’t notice, that doesn’t get in the way of my enjoyment. If the rules can keep out of my eye line as much as possible, that would be for the best.

I suppose Call of Cthulhu 2nd edition fits the bill because simplicity and years of use have rendered the system mostly invisible in play.

Question 17: Which RPG have you owned the longest but not played?

I think I had a few of the paperback-book style RPG rules-sets back in 1984 or so – Maelstrom, Fighting Fantasy, maybe others. I’m not sure where exactly they are though so ownership is a little tenuous.

An actual RPG I definitely still have shelved is Skyrealms of Jorune 3rd edition. 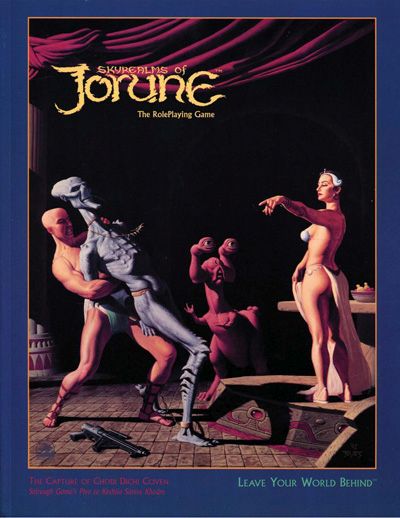 Very pretty art, interesting concepts, no idea what the system is like as I recall virtually nothing from the game beyond the fact grenades were known as ‘throw-explodes’. I’ve owned this game since 1992. I’m no more inclined to play it now than I was back then.

A close second is the iirc D20 version of the (originally German produced) Engel RPG – devastated future world, angels and powers versus the tide of howling evil—which I bought in 2002 or so. Vaguely tempted to play this at some point.

Question 18: Which RPG have you played the most in your life?

Complicated, of course, because the early days of gaming doubtless involved entire months of holidays playing AD&D, day-in day-out, so that must have been a massive investment of time; not to mention a campaign that lasted around a decade.

On the other hand, some variant games were occasionally woven into that fabric of wall to wall TSR product and, looking back over my gaming life, AD&D doesn’t feel like a huge part of it, it feels more like a staging post for what came later.

There’s been a heap of Villains & Vigilantes, a quantity of Marvel Super Heroes, a tremendous amount of Runequest, several years of James Bond, and strange eons of Call of Cthulhu.

It’s probably AD&D though, if only because I played it during a period when I had the opportunity to sacrifice those endless summer hours.

I’m a big fan of Runequest. I also liked the ‘flavour text’ style scene-setting quotations in the Cyberpunk RPG.

I think Broken Rooms did some great stuff in terms of creating variant Earth descriptions from an in-setting perspective. I was certainly very happy with the ones that I wrote. I’m allowed to say that, right?

Question 20: What is the best source for out-of-print RPGs?

These days it’s mostly Ebay. With some dabbling in specialist on-line stores like Shop on the Borderlands where I just recently managed to (finally) score a not-ludicrously-priced copy of the Dark Continent RPG.