Day Thirty-one: Favourite non-RPG thing to come out of an RPG?

I’d been working on a post-apocalyptic novel called COLD MERIDIAN when I first encountered the game Apocalypse World, and it probably influenced the general feel of the book in a great many ways.

A year or so later on, with the novel still very much a work-in-progress, I played in a session of Apocalypse World at the Q-con games convention in Belfast, and decided to choose a character book that suited one of the characters I’d been dealing with in the novel. The Cold Meridian novel character is called Jager Chanco; basically she’s a dying-Earth-future bodyguard for a creepy psychic guru as he tours various religious compounds (called religs) in the wastelands.

The Apocalypse World character was an androgynous battle-babe called Snow, and Snow’s exploits (with some tweaking here and there) became the tale of a character called Frost who appears in the story “Under the Green Witch” from the Fox Spirit Books Girl at the End of the World anthology, volume 2. 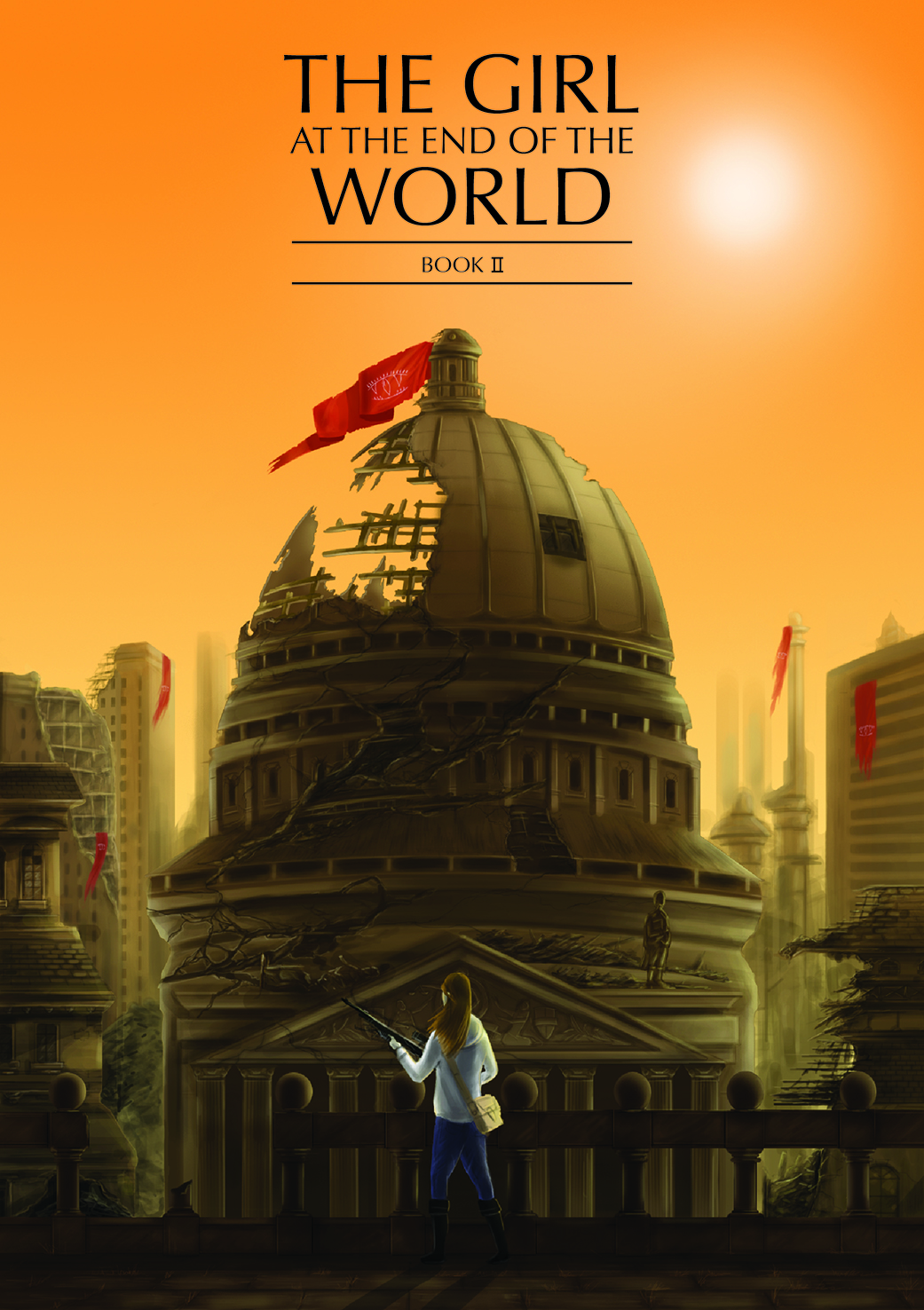 This is the second of two epic volumes containing tales of all manner of apocalypse and the varied stories of the women and girls who have to deal with what’s left.

Full details and links here: Girl at the End of the World

I’ve had a few characters, campaigns etc sparked off by watching a particular movie (for example I think the recent NOAH film might make a neat Apocalypse World hack) but in the main I think it’s music that does it. There’s a different buzz for creation there.

Anything from Jethro Tull and Bob Dylan to Gary Numan and Heaven 17; not to mention everything inbetween/around/before/after.

I’m never sure if the music is the inspiration itself or if it’s simply making things coalesce.

Example: I’d planned to do some kind of superhero background, so that was very much in mind, and then I was listening to March the Mad Scientist by Jethro Tull and it clicked with what I had bubbling away in my head.

The lyrics of that song (“and March the mad scientist, brings a new change…”) added to Rage In Eden by Ultravox and a few other things, led to my MARBLE ARCH superhero campaign (“and they were the new gods, and they shone on high”), which appeared in slightly altered form as the DECEMBER STORM variant Earth in the original Nearside Project game.

Different music might have resulted in a somewhat different setting?

END_OF_DOCUMENT_TOKEN_TO_BE_REPLACED

Well, clearly there’s Glorantha, but on the other hand there is also what’s known as the NEARSIDE from Broken Rooms (the RPG formerly known as THE NEARSIDE PROJECT). It’s published by Greymalkin Designs who are also responsible for the ‘high fantasy brought low’ game DESOLATION.

Broken Rooms is mostly written by Stephen Herron, and deals with thirteen alternate versions of Earth, where things are going very badly indeed.

There’s a world struck by an asteroid, a world where aliens have invaded, a world turning into an icebox. I could go on…

At this point I should probably mention I am responsible for some of the stuff in Broken Rooms – some worlds and bits and bobs – but I do genuinely think it’s an excellent background for exploring anything from high adventure to subtle introspection, all wrapped up in a deeper undercurrent of story about grief and meaning and what’s all this stuff about the number 13…

I like a table and comfortable chairs. It’s not essential but I think people get more into ‘game mode’ (if there is such a thing) when they’re sitting around a big table and have enough room for their character sheets, pencils and dice, beverages and snacks. Plus enough space in the centre of the table for maps or handouts. Bonus points if the table is away from the television, passing non-player traffic and any other distractions.

Gold star if there’s a giant chalkboard on which to write down important stuff about plot etc.

Day Twenty-three: Perfect game for you?

Anything. Okay, almost anything.

It’s the players (GM included) that make the game, not trivial stuff like background or setting or system. Clearly there are settings I prefer – superheroes (in disaffected vigilante format), spies (worn down, world weary, post-cold-war looking for a new foe style) – but, whatever is on offer I’ll usually give it a try. I’m not a huge fan of unrelenting grimness, but even that can be lightened by the right group.

Everyone gets together and tells an entertaining story for a few hours/days/years. That’s the perfect game.

END_OF_DOCUMENT_TOKEN_TO_BE_REPLACED

Not sure. Back in the early days we spent entire summers playing AD&D or SPACE OPERA or whatever from very early in the morning until long past dark. I’ve not done any of those charity ‘play a game for 24 hours’ things.

I was once in a terrible, terrible home-brewed science fiction game at a con. That session felt like a painful eternity…

RUNEQUEST. The landscape, the people, the mythology, the sense of scale etc.

It just resonates on the correct frequency for me.

This raises an interesting question (for me anyway) about what exactly makes a ‘favourite’. I mean, I couldn’t tell you the first thing about the rules or the background for Space Opera – beyond I vaguely recall one of the scenarios had a Sky Marshall character who was not unlike a heavy breathing villain from an at-the-time-rather-popular sci-fi movie franchise…

As I recall it, the campaign I was involved in was heavily influenced by DUNE. There was a lot of noble houses and politicking involved. But also a lot of dropping ordnance from high orbit on unsuspecting enemy forces.

What made the game great, however, was the GM and the group and the fun we had playing it for long summer days about twenty-five years ago. I guess it could have been any game? Or maybe something that wasn’t Space Opera wouldn’t have sparked the same interactions and would have lacked the same entertainment value that we found there?

END_OF_DOCUMENT_TOKEN_TO_BE_REPLACED

Greg Stafford. I’m more interested in backgrounds and world building than focusing on clever systems for play, and the GLORANTHA setting for RUNEQUEST is incredible. Stafford’s KING OF SARTAR book of mythology & lore is outstanding.

And having mentioned King of Sartar, I’ve just discovered there’s a new revised and annotated edition that I do not have :-O

Tough question, this one. I liked a lot of Larry Elmore stuff from back in the day. Not to mention a whole heap of illustrations from various Palladium RPGs.

White Wolf art was always pretty strong, and there was one in some Vampire book or other of a Cop or Private Detective. Woman in a trench coat carrying a pistol. I thought that was an excellent capture of character and purpose. Can’t find it right this moment of course, but I’ll go with that one.

I’ve never listened to a podcast. I wouldn’t even know where to start in terms of finding a good one. Maybe I’ll fix that before #RPGaDAY2016.

END_OF_DOCUMENT_TOKEN_TO_BE_REPLACED

That would have been Labyrinth Lord which I played a brief session of at Q-con 2015.

It’s another of those retro-style stripped down basic adventure experiences, attempting to capture the glory of the old school days; dungeons, monsters, fights in the dark!

At the moment, it’s Stars Without Number. Did I mention that was free?

Also, have to mention Puppetland by John Tynes. A fairytale world of puppets struggles against the harsh rule of the twisted dictator Punch.

I could have gone for the D&D playing in ET. Or the AD&D episodes of COMMUNITY.

And then of course there’s MAZES & MONSTERS. So bad it’s funny.

I’ve decided to go with a religious tract though. DARK DUNGEONS by Jack T Chick publications. An exquisitely wrong-headed rant about the dangers of RPGs and how it turns all the players into actual wizards/witches/tools of Satan.

END_OF_DOCUMENT_TOKEN_TO_BE_REPLACED

Day One: Which forthcoming RPG most looking forward to?

I loved Apocalypse World by D Vincent Baker; the design work, the bare hints at setting, the general vibe, the way it brought characters together and put them in conflict with a free-form fallen-world of desperate survivors scrabbling through the ruins.

I’ve not backed any. Not being totally connected to the whole gaming/blogging ‘community’ I tend to learn about these things three weeks after the kickstarter has closed. I really need to start paying more attention…

In terms of ‘new to me’ games, I was planning to go with Hero Kids; clean design, clear and simple rules, excellent art and the children (ages 8 to 13) seem to enjoy it when we manage to find time to play amidst the computers and tablets and DVD-watching.

Last week though I finally encountered Stars Without Number, and despite the fact I’m just at the ‘reading the book’ stage, I’m already well on the way to being a big fan. It’s science fiction, in the far future, in a universe that’s slightly worn out and weary, but also built upon the ruins of a better past. Aside from that it’s basically D&D in space, and you can even use old monsters and scenarios with a little tweaking; dungeons become narrow-twisty corridor spacecraft, monsters are alien races, etc.

I have big plans.

END_OF_DOCUMENT_TOKEN_TO_BE_REPLACED

Okay, so over at the blog called Autocratik there’s this RPGaDAY thing where folks are meant to blog, tweet, facebook, vlog, or whatever, every day for the month of August, on the subject of tabletop roleplaying games and with daily topics taken from the image below.

I had intended to do that very thing, and do it properly, but unfortunately various things conspired against me. So I’m instead going to offer a quick run through of all/most of the #RPGaDAY2015 subjects on this, the final day.